I just started watching this Danish TV series, Rita, which is about a 42-year-old teacher who does not give one single f*ck about what anybody thinks. Not the kids, not the other teachers, not the principal, not her own children, not her mom… nobody. You can see it right on her face. All. The. Time.

She screws up a lot. In the last episode I watched, she told her teenaged gay son that the bullying he was suffering was not really a big deal because being gay isn’t a big deal, and he should just get in on the joke to diffuse it. It was painful to see the hurt in his eyes meeting the nonchalance in hers.

But her DGAF approach to life also leads to great things. Once she subversively gave this boy chocolate cake to hand out to his classmates after his parents tried to ban sugar from the school, so he wouldn’t be friendless (which is what happens when you hand out sad tofu brownies). And once she didn’t have a bandaid so she stuck a maxi-pad on this girl’s hand. Also, she spontaneously threw away her entire creepy troll collection (I like throwing things away1).

She communicates constantly without saying a word, and the deliciousness of her face-tivities makes me want to make more faces too. Which, if you know me, you know is maybe not the number one thing I should be trying to do. I have a pretty excitable face. Which I wouldn’t know about except for the fact that you’re all constantly pointing it out. It usually makes me self-conscious, like this piece of me is just uncontrollable and it’s telling all my secrets, all the time.

I spend a lot of time admiring people who can keep a straight face. It completely fascinates me. Think of the power they have!

But the other end of the spectrum, where Rita lives, is also powerful. She reminds me a lot of my very first face-making role model, the great Murphy Brown. 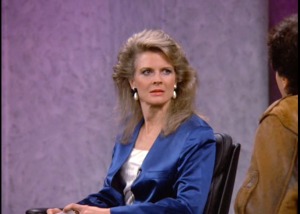 Murphy’s faces were epic, and I lived for each and every time she lasered her eyes at someone and said exactly what she was thinking. I was like yes yes yes, just go ahead and say it. Tell Corky! Tell Frank!

My kid-brain didn’t really get the dynamics of the FYI newsroom (I was under 10 while this show was on TV), but I did 100% understand the pain of biting my tongue when someone was driving me crazy. And Murphy Brown never had to do that! Her mouth got her into trouble a lot, but it was always funny – like when she so wanted to guest-conduct an orchestra that she fell for Olivia Newton-John’s tricks (I wouldn’t have been able to resist either. I get you, Murphy.)

It’s hard to find episodes of Murphy Brown to watch now – it’s not available anywhere [sad face]. But I really wish I could, because one thing people keep telling Rita is that her behavior is “childish” and I’m curious to see whether people said the same thing to Murphy [outraged face]. I can’t imagine a male protagonist being called childish in a professional setting under any circumstances, really.

The other issue is that assertive women like Murphy and Rita get labeled aggressive or bitchy, in situations where a guy would be admired for speaking up and taking a stand. And just imagine the compounded stereotypes if the Murphy Brown or Rita characters were played by Asian or Black or Latina women. Would Dan Quayle’s comments (he said Murphy was “ignoring the importance of fathers by birthing a child alone”) have been different if she weren’t White? When are we having a Murphy Brown discussion group?? Also, somebody else please start watching Rita so we can talk about that too.

1. Once I threw a mop off my second-floor balcony into the dumpster. Also I threw an entire ruined cake out the door. Both felt amazing.